In today’s society, we are stuck in the second chakra, thus preventing us to evolve.

“with your every thought, you create your world – as the enlightened Buddha once said.

whereever your attention goes, your energy flows. by Kahuna,

We provide you with a simple tool that will chang

This chakra governs imagination, that which creates desire leading to sexual gratification. Procreation, family and fantasy. This chakra is Lunar, feminine rules by Mercury and influences the flow of energy on the left side of the body.

Nadis are linked with the chakras. Sushumna plays a vital role in yogic and Tantric practices, one of the most important nadi. There are a whole network of Nadis which are carriers, with two types of nadis, one carrying pranic force and the other mental force. As all nadis do not take a physical form, nor visible in character, it is impossible to locate them unless trained to do so. One who has learned acupuncture & acupressure or trained in chakra healing are trained to locate them.

The first ten nadis, according to the Shiva Svarodaya, are connected with the ten openings of the body known as “the ten Gates” in Tantric Teachings.

Each of the nadis are interconnected between the chakras and the Navel center, as such when there is an imbalance in one center, it influences the others and it also manifest itself in the navel .

Click there to see how they effect the Navel. The navel center feeds energy to the body, mind and spirit via the nadis. There are sufficient nadis in the navel to send energy where it’s needed. It is crucial that the abdominal region be clear so that pure energy is always free to flow. Should the navel center be blocked, the energy flow get blocked thus losing vigor and vitality. 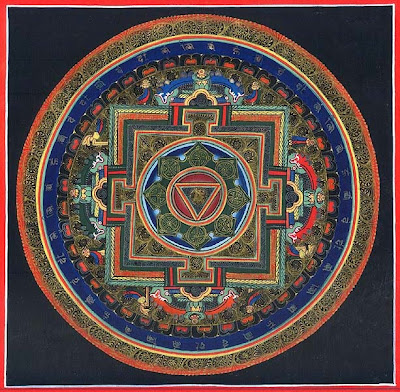 Tantric sound and visualizing therapy  clear the center and restore  vigor and vitality. This also prevents your from growing beyond the second chakra. In most western countries this center is heavily choked from an  early age due to poor diet, lack of touch and love, air, noise pollution and thought pollution. Many people have failed to take care of their emotional health, sex life and second and fifth chakra’s health.

The nadi in the throat (fifth chakra) terminates in the (Yoni) the genitals. The ruling planet for this chakra is Jupiter and the element is air. The throat chakra directly influences the second chakra though sound and emotions. The throat chakra deals with issues such as : 1. being caught up with pride of knowledge 2. Shown that goading or pushing is still needed. 3. Fear 4. Temptation 5. Tension

Five work organs are employed in the creation of all karmas, hands, feet, mouth, sex organs, and anus. The mouth and sexual organs are the most powerful of the five. Humans use or abuse of the organs create the most amount of either good or bad karmas

When this center is active and balance we enjoy the following;

Attain balance between the outer world and the world within

Expansion of personality begins in this chakra

Attention is diverted towards desire and fantasies of the sensual nature

One will sleep between eight to ten hours nightly, most time in the fetal position. One will reach out for to his or her family and friends for physical contact. The desire for physical sensations and mental fantasies can be a problem for the person of this level. A person on the second chakra could experience a downward whirlpool effect on the psyche, causing a person to be restless and confused.

The second chakra encompasses the astral plane as well as the planes of fantasy, nullity, jealousy, mercy, envy, and joy.

The second chakra person will see the world with a negative mind, nothing excite, nothing pleases, all is lost. Envy and jealousy arise from a desire to possess the time or qualities of another. This state of mind results in a destructive state of restless anxiety.

Joy penetrates the entire consciousness of the person who has evolved beyond the aspect of the second chakra.

There are two major reason why one will be a second chakra person beyond the age of twelve.

Those who have been sexually abused, especially when young,  will not grow beyond the 2nd chakra until healed

Those who have been casual about sex at a very young age. Having sex outside of a loving relationship. This creates imbalance in the physical, mental and spiritual bodies and will slow your  growth. Sex without tenderness can create resentment within the relationship, and this could also create imbalance.

Balance between female-male forces is a very important principle in Tantrika. In sex between lovers who love in gentleness cultivate a balance in the field of energy between themselves by sharing the circulating the subtle energies. This relationship becomes a springboard to transforming ones sexual attraction into personal love and then in to spiritual love, thus transcending beyond the second chakra.

There are three different programs that Sri Param Eswaran is conducting that will help heal and clear the second chakra.